Spring in New York, Time to Explore Lower Manhattan and Eat at the Food Courts in Brookfield Place

Friends in New York talked about the weather all winter. Between ice, snow, rain and cold temperatures, the last winter was memorable for being unpleasant.

Now, temperatures have risen and cold weather is a distant memory. Flowers are blooming. The grass in Central Park is green. God's in Heaven and all's right with the world. This week New York is actually warmer than Los Angeles!

On a recent trip to the city, we enjoyed the good weather. We walked miles around the city each day. Thanks to the health app on the iPhone 6 I can track how many miles I walked. One day that was almost 8 miles. So much fun.

I visited with friends and took foodie-tours in different parts of town. I stopped at the Met (the Metropolitan Museum of Art) to check out the amazing art in the special exhibit of Plains Indians: Artists of Earth and Sky. 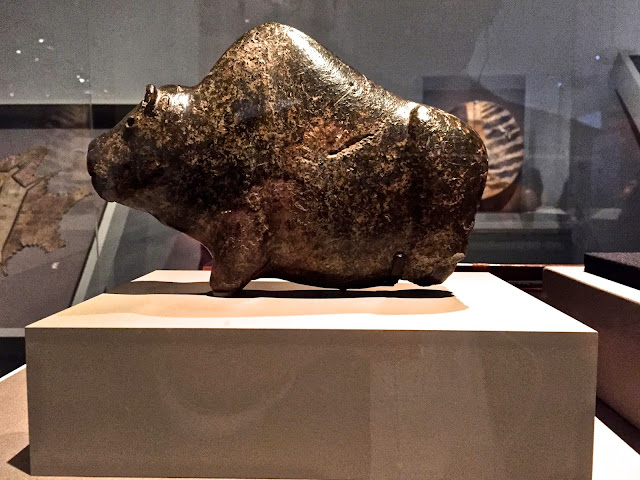 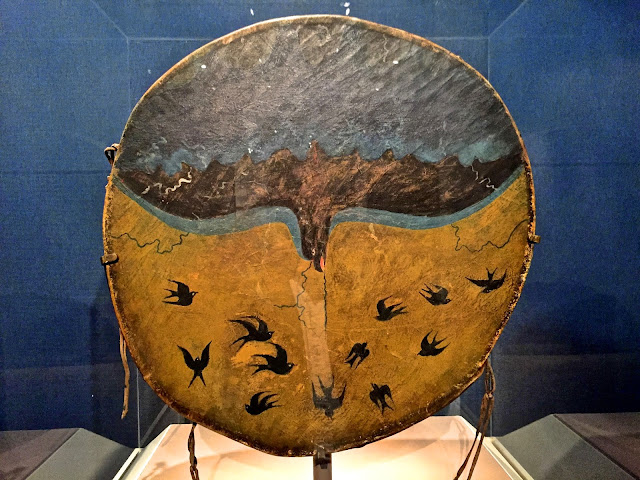 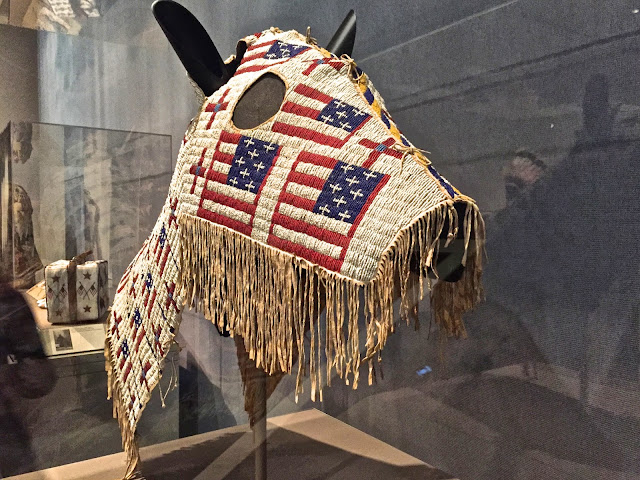 I cooked a couple of meals for our friends, shopping at the Fairway Market on the upper west side (Broadway and 74th Street) and had a day revisiting favorite restaurants around the city like the Vietnamese Nha Trang One Restaurant (87 Baxter Street, NYC 10013, 212/233-5948)  in Chinatown to have the salt and pepper shrimp and to eat at a new restaurant, Mission Cantina (172 Orchard St., New York, NY 10002, 212/254-2233) south of Houston on the Lower East Side. 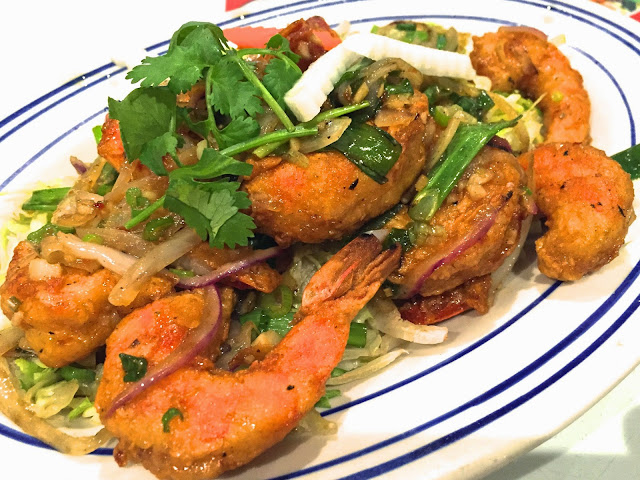 I had walked past the restaurant several times without investigating, assuming it was just another wanna-be New York City Mexican restaurant. A good friend showed me the error of my ways. The wildly colorful, very small Mission Cantina is a very interesting mash up of a restaurant. 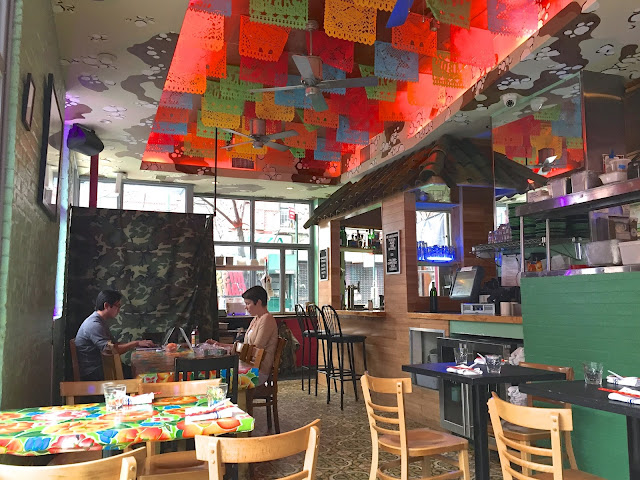 Vietnamese dishes are served for breakfast and Mexican-ish dishes during lunch and dinner.  We had Mexican-style dishes for lunch. They were unlike anything I had eaten in LA. The flavors were jazz-riffs rather than representations of traditional Mexican dishes like mole.

In the morning, I loved the Vietnamese duck and scallion congee topped with a fried egg and served with an enormous shrimp baguette with deep fried whole peanuts and mashed garlic. So good. What an amazing way to begin the day. 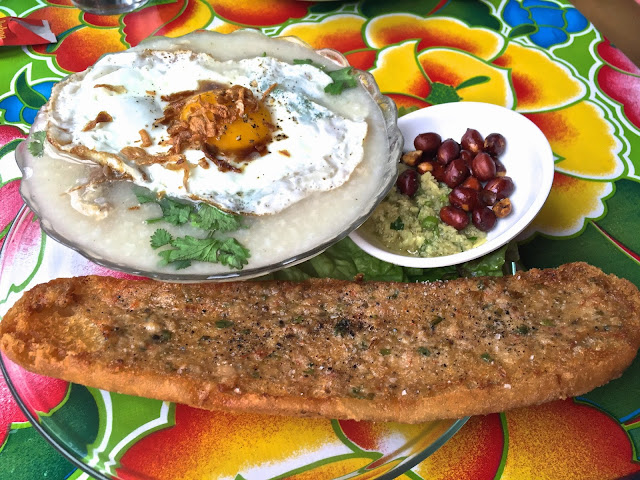 I spent most of one day with another friend in Lower Manhattan at Ground Zero where most of the public areas are open. One Trade Center dominates lower Manhattan as did the Twin Towers it replaced. At the 9/11 Memorial, cascading water disappears into a dark cavern, the perimeter above is inscribed with the names of those who died. 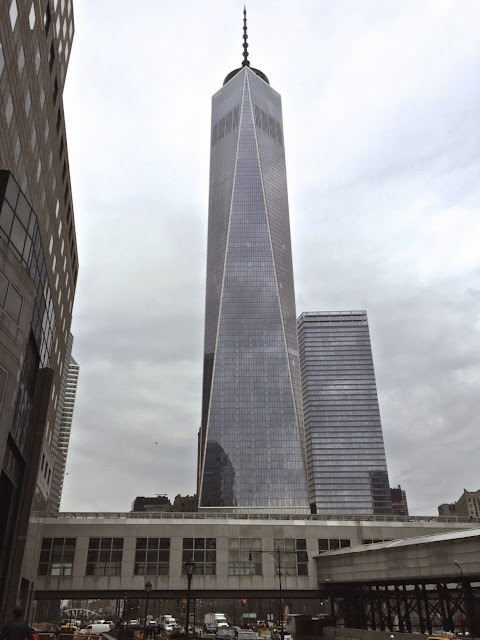 People take selfies against the memorial and bend backwards to frame a shot of One Trade Center to include the very top. 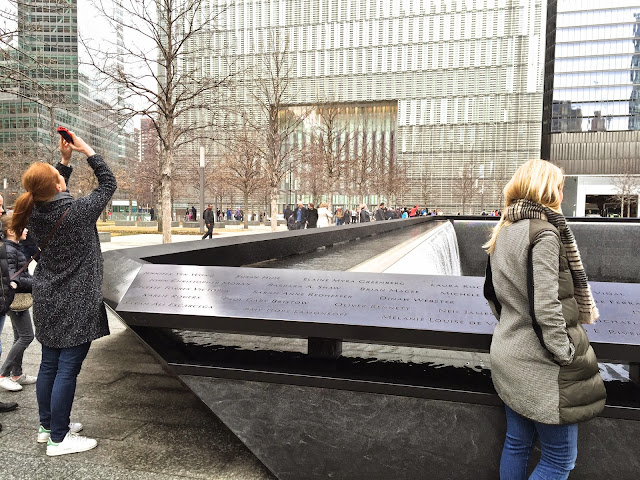 Construction continues on the east side of the area but the area to the west is now open to the Hudson. On the ground floor of Brookfield Place (before 9/11, the World Financial Center) a broad patio faces the water. Two food courts inside look out into a large atrium. 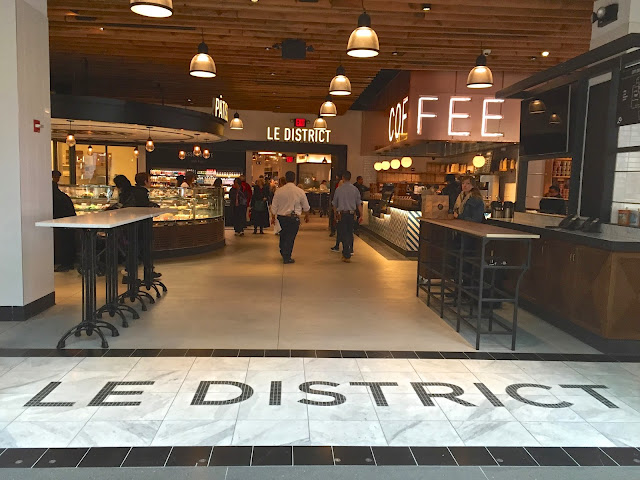 Le District opened in the spring. Wanting to be a French version of Mario Batali's Eataly, the shops in Le District offer a variety of specialty products that will stimulate a Parisian sense memory. 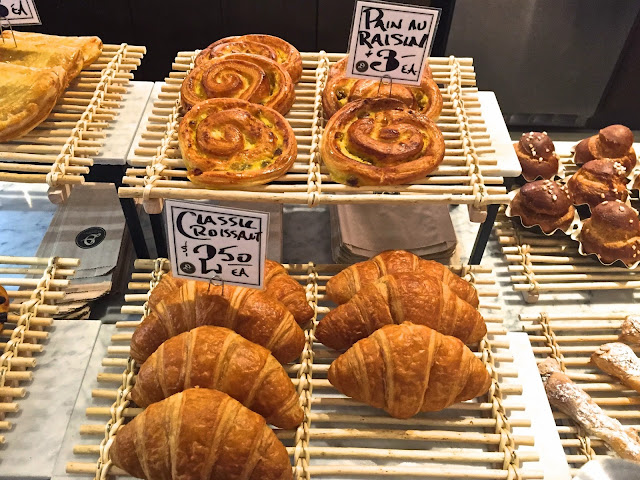 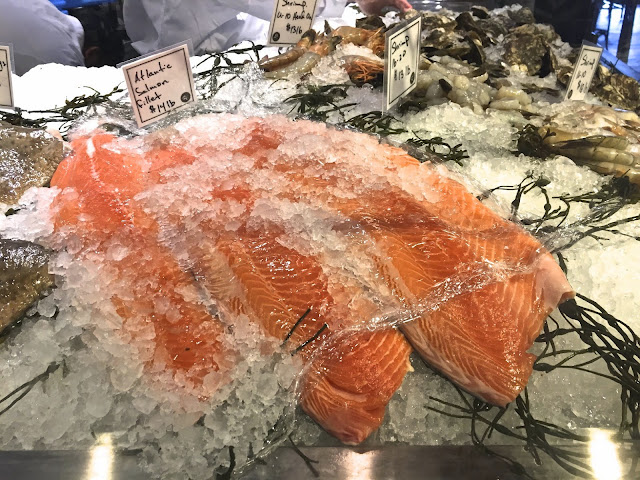 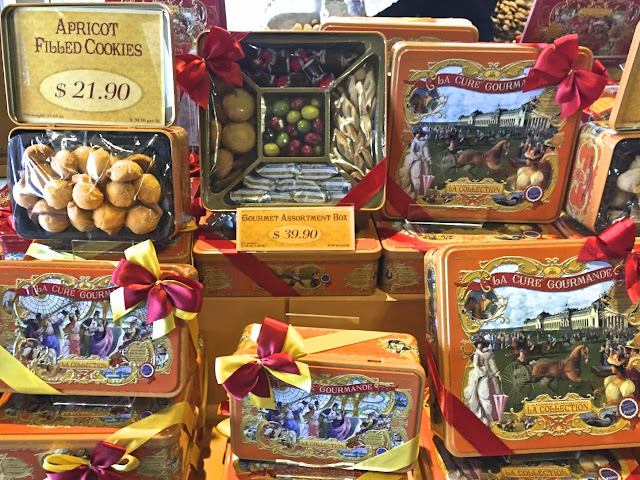 Hudson Eats on the second floor is a large food court. Light pours in through tall windows facing the river and a patio planted with trees. While downstairs focuses on the French experience, upstairs you can range the world in search of culinary treats, including pizza, hamburgers, Thai dishes, sandwiches, baked goods, sushi, barbecue, Mexican food and freshly made salads. 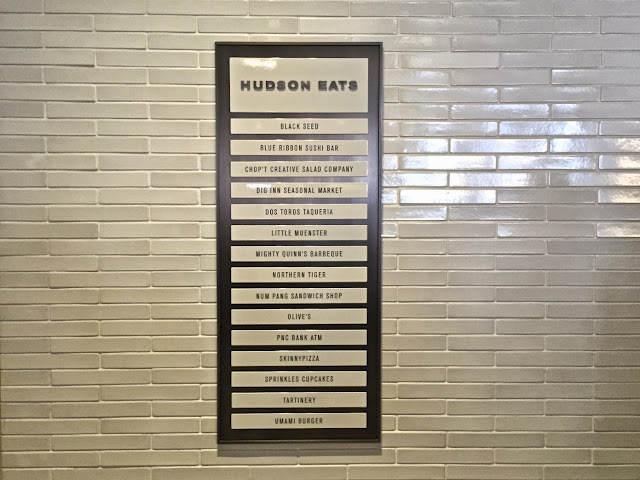 With so many choices, a good friend was my guide. We chose Texas style fatty brisket with cole slaw,  cucumber pickles and baked beans from the Mighty Quinn and an order of pork and chive dumplings from Northern Tiger. 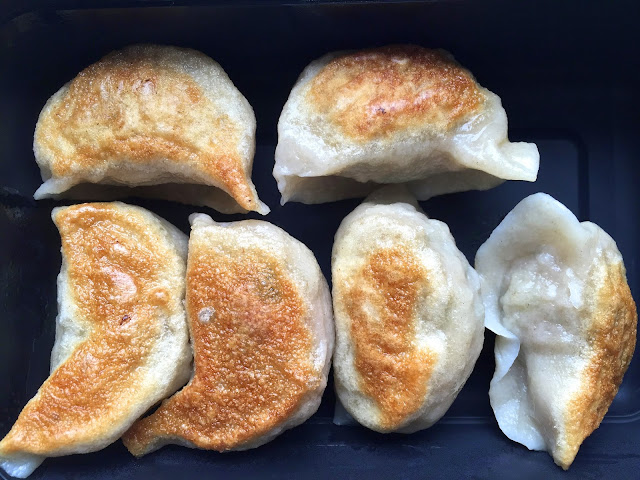 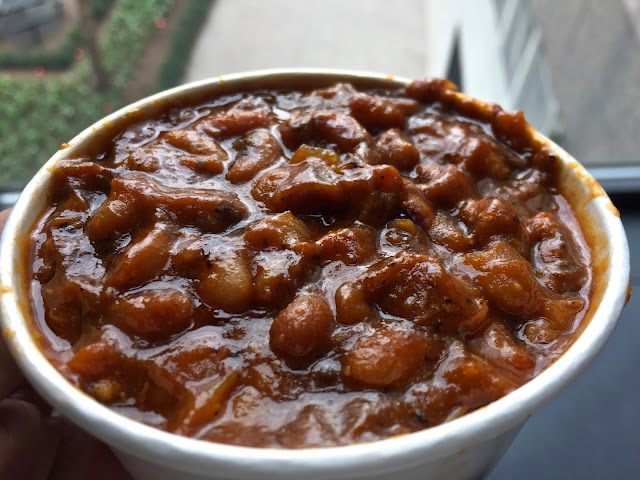 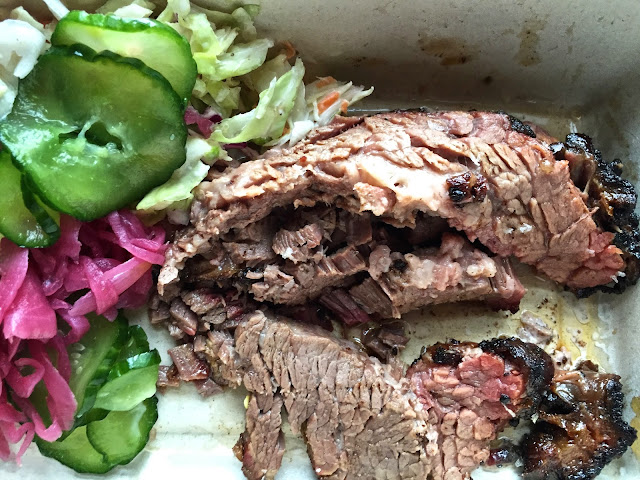 They were as different as dishes could be. They were both delicious. Each in its own way, perfectly prepared. Moist where moist was needed. Crisp where crisp was wanted. 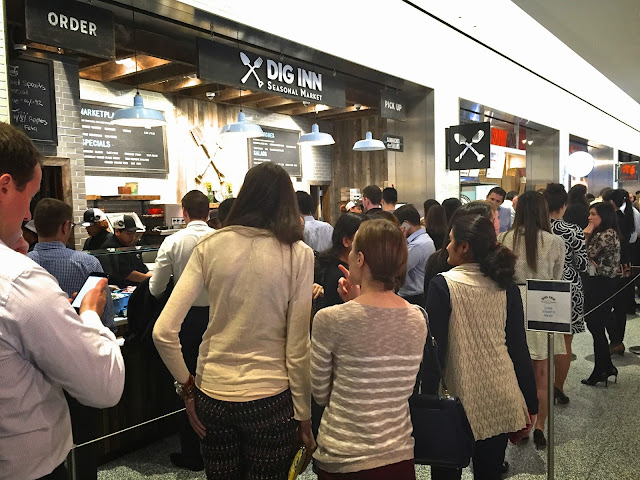 Hudson Eats is definitely worth a stop when you are near the 9/11 Memorial or visiting Wall Street.
Posted by David Latt at 8:59 AM