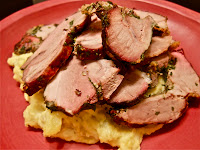 A hot breakfast is a smart way to begin the day. But it can take too much time to prepare. Because they're already cooked, left-over mashed potatoes are a quick and easy way to make a nutritious breakfast.
For dinner last Sunday, we had a Caesar salad made with frisee instead of romaine and roast pork (porchetta) flavored with Italian parsley, garlic and onions. Garlic mashed potatoes and roasted whole tomatoes were the sides.  A plate of cut up cara cara oranges and a custard with crystallized ginger and orange juice finished the meal. All in all, dinner was very satisfying. 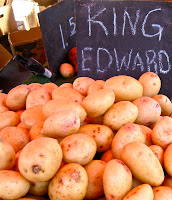 The next day, the refrigerator was the beneficiary of Sunday's dinner.  Considering what was left-over, we were looking at a succession of meals we could have during the week.
Reheated, the porchetta could easily be enjoyed as an entrée or a hot sandwich. The roasted tomatoes would make a delicious pasta sauce. And the mashed potatoes....! They were so delicious the first time around. 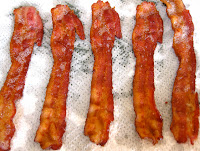 Made from King Edward potatoes bought at the Santa Monica Farmers Market, the mashed potatoes were sweet and full of flavor. Certainly we could just reheat them to serve again with the porchetta but they would also be good for breakfast.
From my hippie days, I always save the potato skins when I make mashed potatoes because I add them to stocks. It occurred to me that they would also be good sauteed (to crisp up) and added to the mashed potatoes.
Some bacon would be good too.
Breakfast Mashed Potatoes with Crispy Potato Skins and Onions
Using a non-stick pan is the way to go with this dish. Just be sure to use the pan on a medium-low to medium flame to avoid health risks. 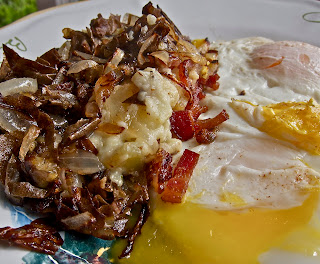