Tomato Pintxos for Labor Day or Any Day


On a trip to Northern Spain in the spring, I discovered pintxos. 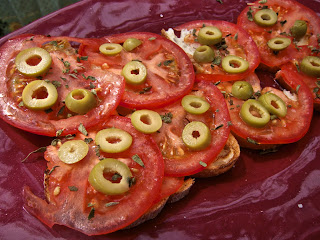 In Spanish bars, the food served with beverages are tapas (about which everyone knows), pintxos and bocadilas. There's an easy way to distinguish these three Spanish appetizers. No bread on the plate, it's tapas. One slice of grilled bread, pintxos. Two pieces of bread, bocadillas.

Bar food can be as simple as a bowl of beer nuts, but in Spain having a bite to eat in a bar means something very different.

The invention and flavors of pintxos are unlimited. Think of wonderfully supportive flavors and textures to place on top the solid foundation of a thin slice of grilled bread and you have a beautiful and tasty appetizer to go with an ice cold beer, glass of crisp white wine or a refreshing summer cocktail.

One of the best pintxos I enjoyed on the trip was the simplest. In Oviedo, near the Cathedral in the old town, in a working man's bar away from the tourist crush, A'Tarantella (Calle Jesus n 1, Oviedo, Spain, 985 73 81 65) restaurant served a simple pintxos that was one of my favorites. 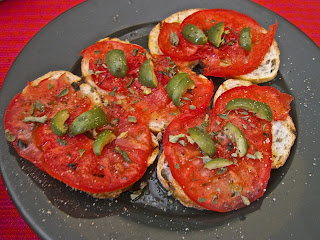 Thin slices of tomatoes were laid on top of a piece of grilled bread, seasoned only with a drizzle of olive oil, salt, pepper, sliced, pitted olives were scattered on top and dusted with dried oregano.

For the bread, a dense white or whole wheat loaf is best. The tomatoes should be fresh and ripe but firm.

The individual ingredients can be prepared an hour ahead but the pintxos should be assembled just before serving to prevent the bread from becoming soggy from all those delicious tomato juices.

Slice the bread 1/4" thick. Grill on a hot barbecue, cast iron frying pan with grill ridges or roast in a 450 F oven for a few seconds to put grill-marks on each side. Remove. Set aside. 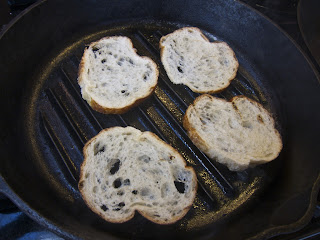 Set up an assembly line with the ingredients ready to go as soon as the bread is grilled.

Using a sharp chefs knife, slice the tomatoes as thin as possible. The tops and bottoms of the tomatoes should not be used. They can be finely chopped and used as a topping for another pintxos or to create a salsa.

Posted by David Latt at 3:18 PM No comments: